Hair loss and hair fall are two separate things. Hair fall is a natural daily occurrence. Human head contains over 100,000 hairs and one normally sheds 100 to 150 hairs a day, every hair is genetically programmed. In general 85% of the hair on your head grow approximately 1 centimeter per month for about 2 to 6 years and then fall off. Hair loss is mainly caused by a combination of ageing, change in hormones and family history (genetic) of baldness. As a rule, the earlier hair loss begins, the more severe the baldness will become. Hair loss can also be caused by burns or trauma, in which case hair replacement is considered a reconstructive treatment. However, hairs on back of your head are genetically programmed and scheduled to last long. Approximately, third of Indian men will show signs of male pattern baldness by the age of 20. The causes of female loss range often from iron deficiency to thyroid abnormalities to childbirth. For both sexes, hair loss causes diminished self-esteem, stress, anxiety, depression and feelings of social inadequacy.

If hair is a symbol of a person’s youth, the loss of it can act as a reminder of approaching old age for men entering their forties. 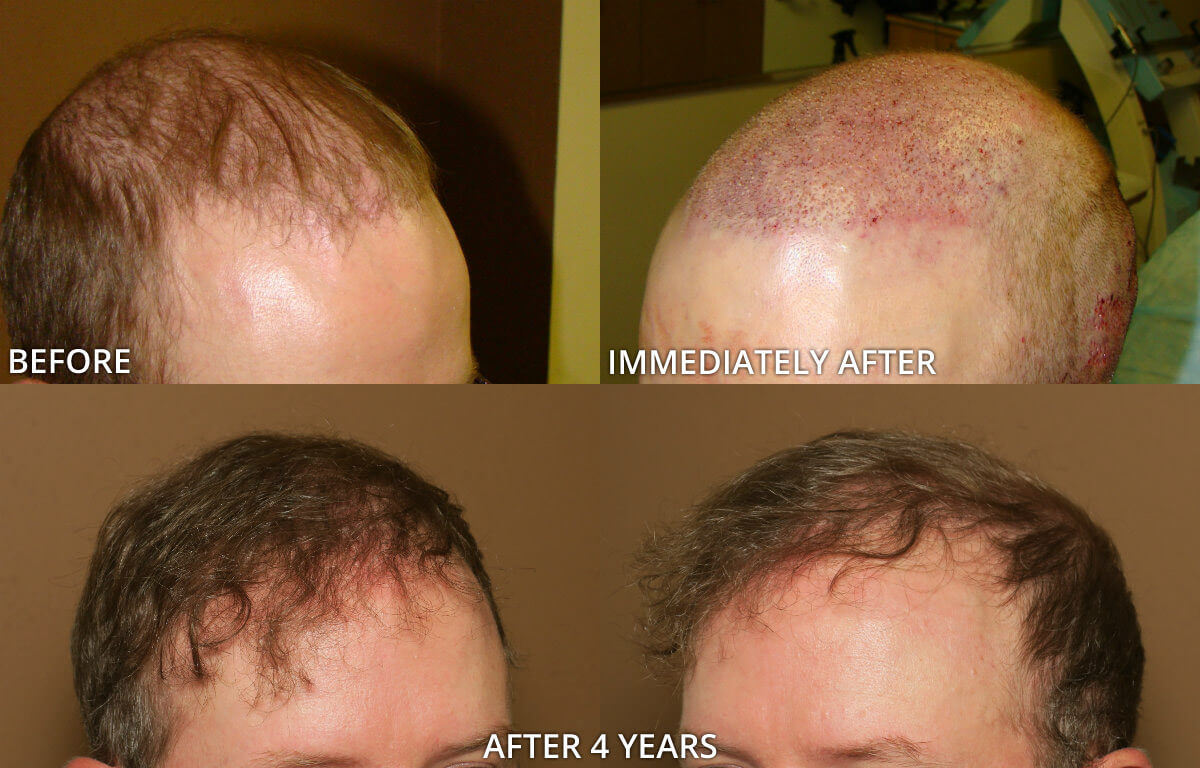 The most common type of hair loss seen in women is androgenic alopecia, also known as female pattern alopecia or baldness. This is seen as hair thinning predominantly over the top and sides of the head. It affects approximately one-third of all susceptible women, and is most commonly seen after menopause. Normal hair fall is approximately 100 – 120 hairs per day. Fortunately, these hairs are replaced. True hairs loss occurs when lost hairs are not re-grown or when the daily hair shed exceeds 125 hairs. Genetically, hair loss can come from either parent’s side of the family.

In hair transplantation, the hair on the back and sides that is surgically moved to the top of the head in the form of a tiny skin graft. Because the hair on back is genetically programmed to grow a lifetime, it will continue to grow even though it’s been transplanted to a different site. This is medical fact, and has been repeatedly proven for more than thirty five years.

For some patients, a hairline may need recreation; for others, more extensive hair replacement maybe required. A few patients may want to correct sparse eyebrows or a scar on the scalp. All these individuals, both men and women, are good candidates for the procedure.

How is the Hair Transplant Procedure Performed?

Under local anesthesia, the donor hair grafts are harvested from a strip of skin taken from area between two ears depending on the extent of hair grafts. The strip is divided into small units of skin (grafts), each containing one to three hairs – the follicular units. Then recipient sites are created in the area of hair loss by making small slits in the bald skin. Each site is no bigger than the opening created by the needle used when blood is drawn from your arm. Then each of the grafts is carefully placed into each recipient site. The donor site in the back of the head is not visible. Three to four months later, the transplanted hair begins to grow and continues to grow a half inch per month for the rest of your life.

Why do some Hair Transplants look “more natural” than others?

Although hair transplantation has been performed for almost 35 years, it’s never become as popular as you might expect. One reason is that old fashioned grafts were simply too big. They contained 10 to 20 hairs, and when they grew, tufted doll’s head resulted. However, if the grafts are made very, very small, with only one follicular unit per graft, the density of the hair can be more evenly distributed and exactly approximate nature’s way. This is the basic principle that’s used in what’s commonly called follicular unit grafting.

Get Expert Opinion
Via WhatsApp